the return of the prodigal son. We had a slightly nervous wait at the airport. The plane was delayed for over an hour due to thunderstorms right over the airport, at the tail end of cyclone Yasi. I can't tell you what a great feeling it was when Louis finally ran through the customs door. Here he is with his new love 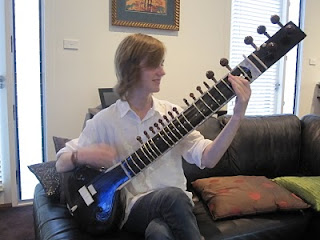 He is even making some reasonable sounds with it - can play some Beatles (Ravi Shankar period) songs. We have had a fabulous weekend listening to stories of his adventures and impressions of life in a country very different to his own. He had a fabulous time but is also very happy to be home. He can't stop smiling. Really excited about his new course. What a fabulous time of life with the world opening up before him.

Managed to get some sewing in - here is panel two of Sallie Ann finished. 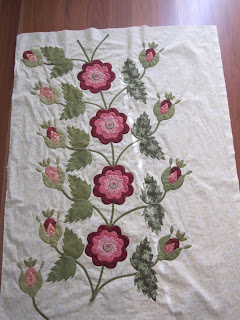 The next panel is exactly the same - so I don't know what I'm going to show you while I finish it. Will have to raid my UFO stash!

Also the post arrived with the first installment of the new Sue Spargo BOM. 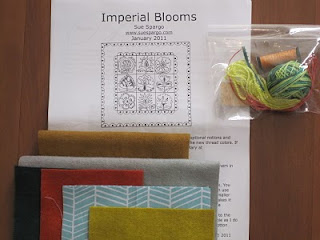 It's very beautiful. I have been wanting to try something of hers for awhile now, bot I'm not really an embellisher, so this will be a challenge. Haven't started yet because I forgot to order the wool thread.

That's it - Phebe's dogtooth borders are calling me.

Have a great week - I know I'm going to.

are with our Queensland friends who are today nervously awaiting the arrival of a category 5 cyclone. Although there will inevitably be great destruction of property I sincerely hope that the residents remain safe. Good luck.
at February 02, 2011 2 comments: 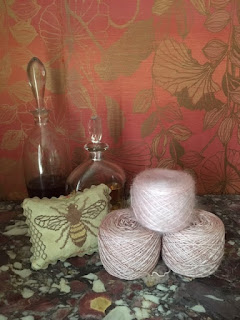 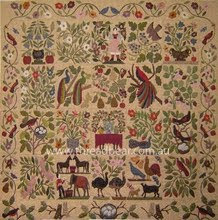